“This is my Family” – The Interrupters

It’s no secret to anyone I’ve spoken to in the last few years – The Interrupters are on the top of my list as far as bands I will go out of my way to catch live. Between their catchy hooks, family-esque banter and their stage show, I will never miss an opportunity to catch them.

The day of the show, we got hit with a pretty hard snowstorm. The venue was about a 90 minute drive from me, but dammit – there was no chance I was missing it. I arrived about midway through the first set of the night – Mt. Eddy.

To be honest, I am legitimately sad I missed a majority of their set. Based on what I saw, these guys ripped. As a guitarist I was blown away and even asked their lead guitarist what he used for his tone! I am going to go out of my way to find a local show these guys are playing so I can get the full experience.

Next up wasThe Regrettes – a rock group fronted by some of the most talented ladies I’ve seen in the music scene over the past few years. They sounded great, got the crowd moving, and even got the crowd involved when the singer jumped off stage to greet everyone in the front row. OVerall a solid 10/10.

Side note – they had one of the most punk looking bass players I’ve seen on stage in my career – both in bands and taking photos.

This tour was a coheadliner, with both The Interrupters and SWMRS being the main acts. Personally, I’ve never given SWMRS a real listen. I checked out a few tracks beforehand, but it isn’t necessarily my style of music. On this stop, The Interrupters played the third slot and I was ready for them!

This is my fourth time seeing this band and it really never gets old. There are few bands that I still get excited to see while standing in the photo pit, but I had a smile on my face and was already bouncing on my toes waiting for that first chord to hit. These are the kind of shows that made me want to be in a band, and later made me want to be up front taking photos. I would be lying if I said I ran back and forth taking photos for the first three tracks. The truth is, I was singing on the top of my lungs, dancing across the front of the stage, and being a total fanboy (while still managing to take a few hundred photos)! I am pretty sure I got some weird looks from the crowd (and my fellow photographers in the pit), but I couldn’t help myself.

I caught Billy Kottage (of Reel Big Fish, Goldfinger, and probably 20 other bands) filling in on keys and trombone. He noticed me too.

The energy these guys (and Aimee, of course) put out is mesmerizing. Every song has a hook, every solo is the perfect fit, every jump is perfectly timed – this is the kind of show every band should be looking to compete with.

The final act of the night was SWMRS and they hit the stage hard! The tracks I heard on my way to the venue seemed to be more laid back and less ‘in your face,’ but the live show was the polar opposite. These guys were not anything like what I expected in the best possible way.

I spent my three songs running around trying to follow the band members as they danced around the stage. The lighting made for some great shots and their audience interaction was fantastic. The singer leaning back from the mic to let the audience sing, then literally grabbing the mic and carrying it over the crowd was something I haven’t seen done this well in a long time.

Despite getting to the show later than I would have hoped, the night was a blast. As if the music wasn’t enough for me to leave there with songs stuck in my head, I got an extra surprise. Swinging by the merch table to buy a few new hoodies and shirts, I ran into The Interrupters! They were taking photos with fans and signing stuff, so naturally I got in line with Kelsey. It’s finally our turn and they instantly recognize me and call me out. Kevin Bivona’s exact words were: “Hey! Aren’t you the dude taking photos and dancing around the pit?” I’d say as far as being known for something, that’s up there. At least it’s better than “Hey, didn’t we play with you that night we all got pepper sprayed in New Jersey?”

Be sure to catch and and all of these bands the next time they are in your area!

Full photo album of all the bands can be found by clicking the photo below: 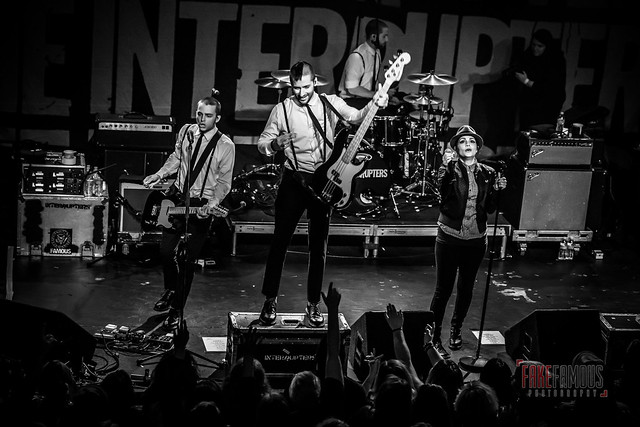 Franklin Park, NJ 08823
FakeFamousPhotography@gmail.com
CONTACT US FOR RATES AND PACKAGES!